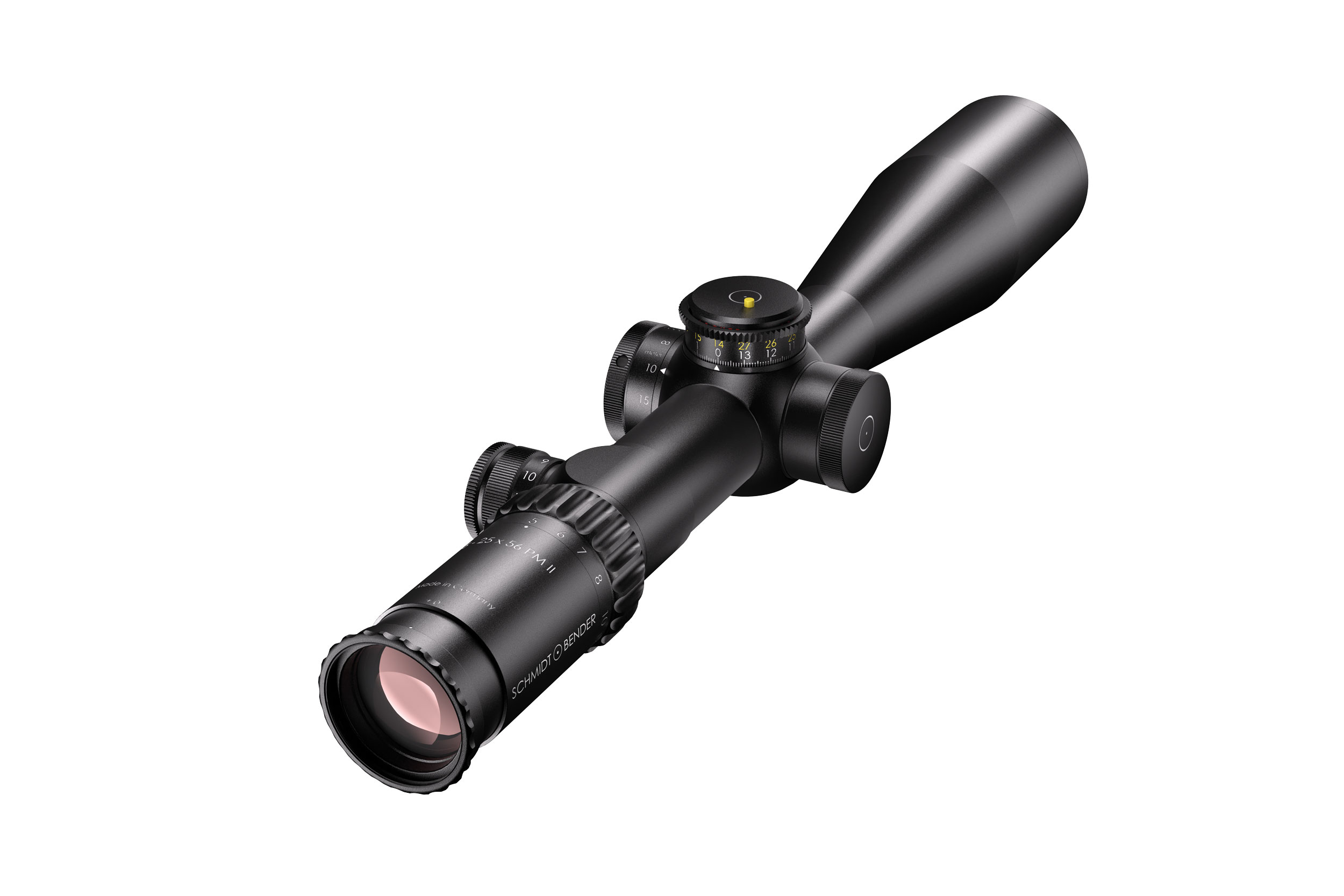 The 5-25x56 PM II has set the benchmark for the industry in terms of optical quality and mechanical reliability. A new ocular design makes our best seller even more operable: a redesigned magnification ring is made out of solid aluminum and can accommodate our Throw Lever. In addition, the diopter adjustment can mount our military grade Polarization Filter via a thread as well as Tenebraex caps without needing any bulky adapters. Another new option is the low-profile elevation turret with a large adjustment range which can easily be combined with a red dot sight for close distances. Due to its great magnification range and well-engineered performance, the 5-25x56 PM II is very popular among military/police units as well as competition shooters which are demanding the best of the best. Offering a vast variety of options, the customer can highly customize his riflescope choice.

The 5-25x56 PM II features now the well-proven low-profile double turn elevation turret which is capable of 27 MRAD (DT27). It perfectly supports the use of an additional red dot sight for close distances. Although being very compact, it maintains all essential features of a Double Turn turret such as a visual and tactile yellow-colored revolution indicator, locking function, MTC clicks and easy to read digits.

The magnification ring is now fully rugged and is made out of solid aluminum. It has been further optimized and now features a magnification ring with deep grooves for a better grip which also allows to accommodate our Throw Lever.

In addition, the diopter has been redesigned in order to attach our military grade Polarization Filter Ocular (see page 45) via a thread. The ribbed structure of the diopter adjustment makes it suitable for the tactical Tenebraex Ocular Lens Cover.

The new P5FL basically resembles the popular pattern of our well-known P4FL reticle which was initially designed for military snipers and has been well-proven around the globe.

Reflecting the ongoing technical evolution the new P5FL represents a slight upgrade without forcing the operator to get used to a completely new reticle design.

It is also perfect for competition shooters and modern hunters alike who prefer a clean reticle design which is reduced to the most important essentials without distracting features. Those who are already enjoying the P4FL reticle will find confidence in the new P5FL reticle.

We use cookies on our website. Some of them are essential for the operation of the site, while others help us to improve this site and the user experience (tracking cookies). You can decide for yourself whether you want to allow cookies or not. Please note that if you reject them, you may not be able to use all the functionalities of the site.